The Most Sincere Pumpkin Patch 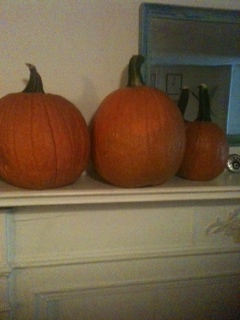 Searching For Sincerity was inspired by the idea of Linus and his sincere pumpkin patch. Ever since our son was small, we've gone on "expotitions" (to quote Winnie the Pooh) each fall, to upstate New York, or Long Island, or some rural area in search of the most sincere pumpkin patch from which to choose our Halloween pumpkins. Forget the patches with the big, balloon pumpkins in front, the corn mazes, the haunted houses...we wanted the real experience, a farm with pumpkins that they grew, a place where we could choose the perfect specimens without the extraneous Halloween commercialism. Some years we had extraordinary success, other years our search ended at the handiest roadside stand available. We rarely went to the same patch...our purpose was to explore...to always be looking for the most sincere of the sincere. So obsessed were we, we began to judge everything in terms of sincerity: restaurants, shops, businesses of all kinds - hence this blog.

Finally, we have found THE most sincere pumpkin patch in the world. How do we know it's the most sincere? It's ours. I accidentally planted pumpkin seeds in our community garden plot, thinking they were butternut squash and they grew like mad. Sometime in July we realized they were pumpkins, not butternut, and we became excited at the prospect of raising our own Halloween pumpkins. Only once before did we manage to grow a pumpkin there, and that attempt ended in tragedy...see video: http://bit.ly/pmEluU

The only thing lacking today, this glorious September day that Jon and I went to our very own patch to pick FOUR beautiful pumpkins, was our son, who is now grown and no longer much interested in pumpkin patches. However, we gave one of them to our little one-year old neighbor Valentina, because we knew she'd like it, and the other three sit on our mantle awaiting carving, or eating, or whatever we're inspired to do with them. It's still a little early for Halloween, but they'll probably last 'til then. In the meantime, it looks like more pumpkins may still come out of our patch, and we now get to revel in our own supreme sincerity. Don't tell me that the fact that we deem ourselves sincere automatically makes us insincere. No, no. We've earned the distinction. Sincere we are indeed.
Evaluation: Extraordinarily sincere! (of course)