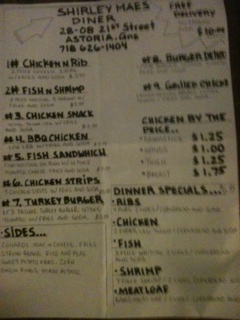 Shirley Mae's...doesn't that name just conjure up images of fried chicken, ribs, collard greens and macaroni and cheese? It did for me and Jon, especially when we saw the words Soul Food under the name as we drove past the restaurant on 21st Street in Astoria. I stopped by during the week and picked up a menu, then called in our order last Saturday night. When we went in to pick it up, the friendly, dred-locked guy named Anthony, the only one on duty besides the cook, told us the place had just been open a couple of months and was doing pretty well. At that hour, around 6:00, there was only one table of little old ladies in the joint, but it seemed more a take-out than sit down place anyway 'cause it is quite funky. Apparently, it had been an Indian restaurant before, and had been decorated in a cave-like theme, with slightly erotic Aztec/Mexican art on the walls. We weren't sure why. But Anthony told us that his grandmother, who owned the place, liked it and so left it as is.

So anyway, for 5.99 a piece, we got the chicken and ribs special, plus a side of mac and cheese. Each meal came with 2 pieces of chicken and two ribs with a side of fries, and Anthony gladly substituted sweet potato fries for french at our request. A soda came with each meal. So we took our orders home, just a five minute walk, and discovered that, though he'd said the meals came with a thigh and a drumstick, and though he mentioned he'd had to substitute a wing in one, actually, together we had only one drumstick and three wings. That was a little disappointing, but the wings were big and meaty, and the chicken fried perfectly - not greasy at all, not a huge amount of batter and not salty. It was the epitome of homemade - just like my East Texan gra-ma used to make it. The ribs were good, a little sweet for my taste, and the fries just fine. The mac and cheese, however, was sublime. This stuff was really authentic. We didn't try the collard greens 'cause Jon doesn't like them, but maybe next time.

You cannot beat the prices, and, though I may not be black, this part-southern girl knows good soul food when she eats it. At Shirley Mae's, it's pretty dang good.