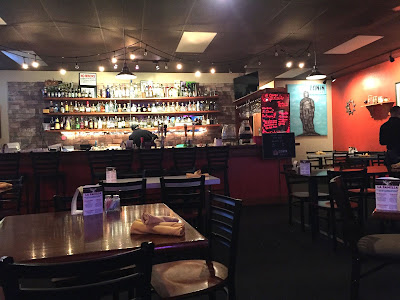 This article was intended to be run in the December issue of the SW Connection. Through a series of rather bizarre lapses in communication, it was not included. Beyond that, our relationship with the paper has now been severed. We wish the Southwest Connection and it's new Editor, Mr. Bill Gallagher the very best in the new year. Mr. Gallagher, by the way, is starting a "Letters to the Editor" column. If you wish to contact him: bgallagher@pamplinmedia.com

Okay then... In mid-September I received a tip from a reader, Katie Songer, about a place here in Southwest Portland that was simply not on my radar in any way. One of the reasons for that, I suppose, is that it’s a little bit difficult to find, even when you know the address on Barbur Blvd. Honestly, I looked, and looked and even drove right past it several times without seeing it. Part of that had to do with the direction I was traveling in. I was heading South on Barbur, knowing that it had to be on the West side of the street to my right, however the place is most cleverly tucked away in a small cluster of shops. To see it when heading South, is very much like merging onto the Ross Island Bridge off of Natio. You have to know how situate your car perpendicularly to do it, right? In the case of finding Conin Mexican Cuisine for the first time, head North, notice that the UPS store is on your right, and look to the left. There it is! Ta-da!

Let it be known, Conin Mexican Cuisine is a destination I’m only reluctantly sharing with you. The reason I hesitate is that, once known, it’s going to be much harder to get in. Fortunately, they offer reservations.

Georgina and I decided to have dinner early on Saturday night. The wind was blowing, and, because I’d just had the car washed, a light rain was beginning to fall. It was already dark in anticipation of the time-shift taking us back an hour. Not having been to Conin before, we could only hope that our intrepid, five-minute journey into the desperate wilds of Southwest Portland would be rewarded with something more than just okay. 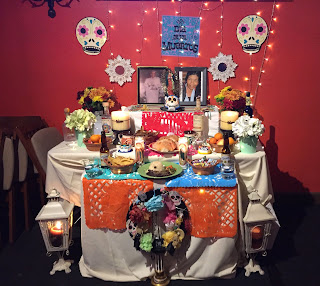 Because of our early timing, we were the first people in the place, and, frankly, entering an empty restaurant can have something of a chilling effect, if you know what I mean? Gah, perhaps it was empty for a reason! How wrong that possibility turned out to be. To be clear, stepping in out of the weather we found ourselves in the cozy, quite beautiful interior: traditional Mexican music played gently in the background. In one corner over the full bar, two flat screens silently displayed soccer and football. By way of the time of the year, there was a lovely Ofrenda (Día de Los Muertos/Day of the Dead - offering table) set up against one wall, honoring those who are no longer with us. In this simple welcoming environment, we felt immediately at home and were greeted most warmly. What a great intimate place this would be for a party!

I started with a stellar Margarita served in a Mason jar with a handle. Georgina had a Pacifico from the tap. To keep us happily occupied while we made our decisions, fresh corn chips were placed on the table along with an excellent salsa, which thankfully contained only a hint of cilantro (allergic, you see). I ordered Tacos de Pescado: three slightly crispy shells generously filled with fish and the house’s special toppings, sprinkled with cotija cheese. Georgina had the carne asada version. Each of these dishes, and I cannot stress this enough, were O.M.G. extraordinary and delicious. Oh, and did I mention the churros made-to-order in-house? I should have!

Katie, closed her letter to me with this, “…since we love it so much, we selfishly want it to thrive so it'll stay in business and we can keep eating there for many years.” Well I couldn’t agree more, however, Katie I would suggest this is something of a double-edged sword. An hour or so later when Georgina and I were leaving, the dining room was very nearly packed, and other rain-drenched cars were eager to contest the spot we were making available in the small parking area. People who know about Conin – know about Conin.

If you know of a business or person anywhere on the planet you think might meet our criteria please send their information to me jon@searching4sincerity.com. I can’t promise to write about them though, as that in itself would be, well, you know… insincere.

Posted by Jonathan Ellis at 9:27 AM