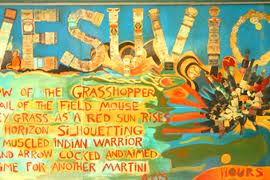 The following evaluation of sincerity was sent to us by Rich Mattiello and is posted here exactly as written.
If one were searching for sincerity in San Francisco, one could do worse than a visit to Vesuvio’s, a bar in North Beach on Columbus, near the grand intersection with Broadway.
Vesuvio’s is a time portal, unchanged since at least the late 1960s. The walls are packed with all sorts of hippie and beatnik kitsch, intricate dreamy murals and framed art posters. An ancient Kodak slide projector shows Victorian postcards on a screen over the bar. The street level has the bar, tables in mahogany booths, and is usually populated by locals, making it an authentic neighborhood bar. Not being a local, I always go upstairs to the loft where there are more tables, and sit in the front near the big windows that look out over Columbus and Broadway, or along the side overlooking the Mexican ‘Paz’ mural across Kerouac Alley on the wall of City Lights Bookstore, itself a most sincere bookstore, long-owned by famed beat poet Lawrence Ferlinghetti and where Allen Ginsburg ‘Howled’.
From your perch in Vesuvio’s you can people-watch the endless parade of characters, locals, tourists and ‘what is THEIR story?’s bustling by.  Diagonally across the intersection you see Carol Doda’s, which I supposed is sincere in a tawdry kind of way, or at least sincerely tawdry. It is a tourist trap, but so original and quaint that you could say it is a sincere tourist trap. It’s claim to fame, emblazoned all over the front, is that it is ‘the place where it all began’, meaning strippers taking their tops off. At one time of course this was quite scandalous but the world has moved on and Doda’s hasn’t, so it now seems a quaint relic from a more innocent past.
On the corner to the left is a four story building, the top three of which are a MAGNIFICENT mural of jazz musicians that dominates the area. You can almost hear them playing over the cacophony of traffic.

The corner to the right holds a solid, sober bank building, built back when banks were built to last. The bank of course is long gone, and for years there was, sadly, a Carl’s Junior there. It seemed out of place inside a bank building, and even more out of place at that particular intersection, because it made North Beach seem like another Disney attraction, like Fisherman’s Wharf. Today, however there is a fine expensive Italian restaurant that seems more fitting.
You can take this all in, as well as a terrific view of downtown SF with the TransAmerica Pyramid towering over it, while sitting by the windows at Vesuvio’s, ideally with a pitcher of Anchor Steam on the intricately tiled table before you, next to a book of poetry from City Lights. If you are really lucky it will be a typical San Francisco summer day, cold and foggy, and the under-dressed tourists will be shivering.
Evaluation: Extraordinarily sincere!