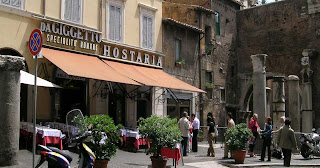 There is a place, in what used to be the Jewish ghetto in Rome, a place you get to by wandering through the cobbled back streets of that ancient city's historic district, that serves a thing as near to heaven as you'll get. It is a fried artichoke - one of Da Giggetto's specialties. Actually, everything we tried in this Roman Hostaria, or Inn, was spectacular, when eight members of my family and I went there a few years back, but none of us could get enough of the Carciofi alla Giude: artichoke in the Jewish style. The restaurant has been there since the 1920's, and is now run by the original owner's grandson. That man's nickname was "Giggetto," but you can read about all of this on their beautiful and informative website, http://www.giggettoalporticodottavia.it/.

Ristorante Giggetto is a gorgeous space wherein you feel the history of the Jewish ghetto come alive. The wait staff tolerated our large group of Americans with patience, though they could not find a table big enough for us all to sit together. To this day, we all dream of that fried artichoke, though none has found another place in or outside of Italy that prepares anything like it. 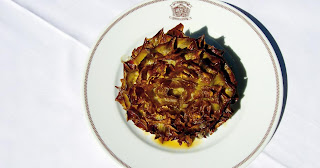