This is perhaps one of the more challenging evaluations I've posted, the reason being that Ad Hoc Art is something more ethereal than what we usually address on these pages. Ad Hoc Art is the organization we originally contacted to assist us in making the Welling Court Mural Project happen. When Georgina and I were originally introduced to the gallery owners, Garrison and Alison, also known as the art entity Buxtonia,  there was a physical location for their highly creative endeavors, but now that earth bound caterpillar (though quite beautiful and compelling all on it's own), has become more than the sum of  its parts. It has gone thorough a synchronistic metamorphosis. 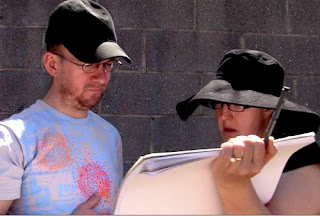 Alison and Garrison continue to do exactly as they have always done, in that they are a focal point and a guiding force for the creation of public art by both up-and-coming and internationally recognized artists. They have an uncanny ability to bring disparate people and thoughts together into works far beyond what might occur without their subtle intervention. They are organizers and soothers in a highly chaotic and tumultuous world through which artists pass, create within, and are free to explore their newest visions. Ad Hoc assists in making it safe to be an artist in a consumerist environment that has identified this particular art style as having no value: works on the bricks of the local bodega cannot be monetized (OMG!) and are possibly even a bit dangerous. This sort of art often pushes people's buttons, though to my mind that's what art should be doing.

So it is that with the help of Ad Hoc Art, the world is slowly coming around to the understanding that there is a significant difference between the thoughtless and angry expression of gang-taggers, and graffiti artists. This art form originated here in NYC, and has since expanded onto the international stage with massive gatherings in Paris, Rome, and Amsterdam. Ad Hoc has very quietly allowed and encouraged many of those same artists, who now display their works on walls as well as in major galleries around the world, to return to where it all started, to pay homage to their beginnings, and it has done so with utter and complete sincerity.

http://adhocart.org
Posted by Jonathan Ellis at 9:22 AM