The following evaluation of sincerity was sent to us by Teresa Barile and is posted here exactly as written. 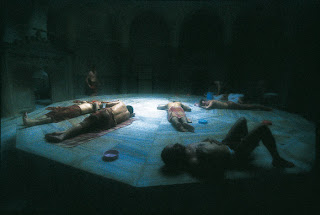 I had the pleasure of luxuriating in a traditional Turkish bath, called a “hamam” in Istanbul.  The
Cemberlitas hamami was built in the 16th Century but lies just next to the column of Constantine, built by the eponymous Roman emperor in the first century, A.D. It’s located in the historic Sultanahmet section of Istanbul in walking distance to the Haga Sofia, Blue Mosque and Topkapki Palace.
If those walls could talk, they’d tell tales of sultan princes, wealthy merchants from the orient and the servants who bathed them.  Today, it serves the tourist population who come to sit on the heated marble slab, while water drips from the 450 year-old dome above. Men and women are separated and served by people of the same sex. On the women’s side corpulent Turkish women, scantily clad, I might add, come with buckets of soapy water and an abrasive mitt, whereupon they scrub you senseless, first on your front, then with a smack on your butt, you turn over so they can do your back. Next, your hair is shampooed while water from the fonts is poured over you.  How does it feel? I’m drooling just thinking about it. I’ve been back several more times on subsequent trips to Istanbul and have brought friends. Follow your scrub down with a dunk in the hot bath, cool bath or a facial mask and stay as long as you like.  The hamam is open until midnight and it’s best to go late in the evening, when it’s less crowded and you’ll have more attention during the scrub down. Afterward, in the central meeting area, refresh with a glass of freshly squeezed pomegranate juice while you plan your next visit.
On a sincerity level the Cemberlitas Hamami itself is Very Sincere.  The women who work there…..pretty sincere.  But you can’t blame them as they’re probably tired of scrubbing lily-white tourists from Western Europe while they struggle to gain entrance into the E.U.!
Evaluation:  Pretty sincere

http://www.cemberlitashamami.com.tr
Posted by Jonathan Ellis at 7:50 AM