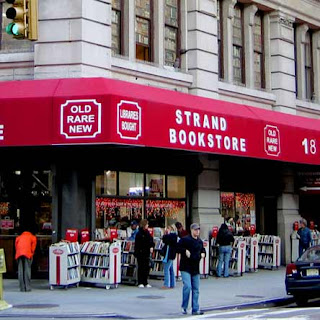 They like to say that they  have 18 miles of books. Frankly it's quite possible that the number of miles is underestimated. Yes, this store is enormously larger than Bookman's in Tucson and one would be doing a disservice to say that this enormous New York institution could be anywhere close to the same level of sincerity as that fairly good sized gem in Arizona, but as it happens the Strand comes pretty close. The two stores operate in much the same way. They are both local chains, and they tend to hire friendly people who actually give a damn.

My recent experience: having accidentally purchased two copies of the same book (don't ask me why) I needed to return one. It was just no problem at all. They asked if I wanted to exchange it or if I would like my money back. I ended up using a combination of the two. No manager needed to be called. there was no overt inspection of the book to see if had been read by George Costanza in a public restroom.

Let me make this comparison: I once purchased a bag of chocolate chips from a health food store that I've been going to for years (and choose not to evaluate in this blog). Those chips were so old that they'd turned gray! Naturally, I took them back for a simple exchange. After several levels of buck passing and inspection of the product the manager hesitantly agreed to the exchange. I  accepted my fresh bag and was  left to slink off into the night like the thief that I so obviously was. Why do I go back? So far they have the best selection and they are a local store. But I continue to look for true sincerity in a health food store, and when I find that perfect combination of selection and sincerity - this one will be history.

So the Strand isn't perfect (it's just too gigantic for that) but it is superior, and they make a real attempt at hometown authenticity in our huge metropolis. They manage to walk a fine line and must be admired for that.

Posted by Jonathan Ellis at 8:13 AM