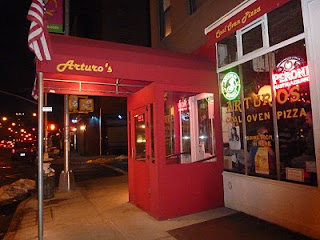 I first starting going to Arturo's in the mid-80's. It was the first place I ever had fried calamari. Even though their standard Italian fare is a little lack-luster, their pizza is mind-blowing, especially the pepperoni. They have a terrific wine list, which is the only thing that adds to a slightly higher bill, because the food is totally reasonable. The atmosphere is funky, super-casual and a little noisy It's often crowded but not with tourists and they usually seem to be able to find you a table. In the evenings they have a bluesy piano going which adds to the over-all downtown, bohemian atmosphere. And yes, the staff is friendly, but in that New York City kind of way.

Houston and Thompson Street
Posted by Georgina at 4:32 PM