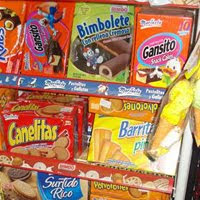 Don't try to pronounce it unless your Spanish is good, however you don't have to speak the language to go into this tiny little Mexican market and find choice items that all pretty much come directly from that country south of the border. There are shelves and shelves of snacks, yummy, salty, greasy, chile and lime flavored snacks. There are Mexican candies stacked practically to the ceiling, a whole wall of dried chiles, tons of salsas and hot sauces stocked behind the counter, and refrigerator cases full of chorizos (Mexican and Spanish sausages) cheeses, Mexican "crema" (a cross between sour cream and creme fraiche) and sodas. Corn tortillas are waiting in packages by the cash register but no flour tortillas - they just aren't that authentic. The more you know Mexican food, the more you'll like it, but even if you don't know it at all, go in and explore. The caballero who runs the place is always there and is as charming and friendly as can be, even when my husband makes his halting attempts to communicate in Spanish, though the man speaks English quite well.

Located on Broadway in Astoria between 42nd and 43rd Streets.
Posted by Georgina at 5:53 PM