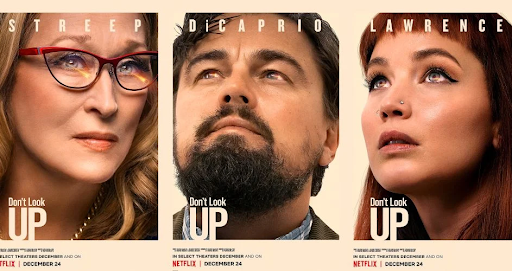 Here are four cranky reviews of some recent movies. Please take with a grain of salt.
Don't Look Up: Entertaining over all - except for the end. In general, I thought it was heavy-handed and stating the obvious. Yes, we're idiots. Some more than others. Yes, probably accurate about what would happen in that situation, but why spend millions and millions of dollars on fancy actors and lots of unnecessary dental prosthetics to drive home the point? Maybe it would be better to spend the money on actually saving the planet. And Meryl Streep - don't get me started. I've never seen her overact like that before, but I'm sure she was directed to do so. Leo DiCaprio (see link) stresses that it's a metaphor for the way we're reacting, or not reacting, to climate change. I get it. Climate change is a slower extinction than a comet, but ultimately, just as devastating. I still argue that those who understand and agree with the message and are taking action don't need to see the film, those who see the film and get the message but are still not willing to take action probably won't be moved to change, and those who deny the message will not see the film anyway.
https://www.youtube.com/watch?v=YEMaLsPTWlo)
The Green Knight: Don't bother. Sooo boring, at least the first 45 minutes, after which we turned it off.
Being the Ricardos: Also didn't make it past 45 minutes. Unless you're a huge Lucy fan, who cares? Also, Xavier Bardem at age 60 or so, a little portly, to be honest, playing a young, hot Desi Arnaz? I didn't buy it.
The Power of the Dog: Beautiful film, great acting, fantastic twist at the end, but overall just too dreary for me.
Sincerity rating: For me, movies also are either sincere or not - it depends on the intent of the director and the commitment of the actors and tech. Don't Look Up was a sincere attempt by the director and some of the actors. So was The Power of the Dog. Nicole Kidman and Dev Patel's performances definitely - but overall, not these particular films that they were in.
Posted by Georgina at 1:04 PM