The word "taqueria" always stops me in my tracks. There's something so authentic sounding about it. When we recently moved to Portland, I was worried that we wouldn't be able to find good, authentic Mexico City style tacos - you know, the ones made from fresh, soft corn tortillas with grilled and other sorts of meats inside. I wasn't so worried about Mexican food in general, since I'm pretty skilled at making it, but I can't make street tacos taste like they do in Mexico City. 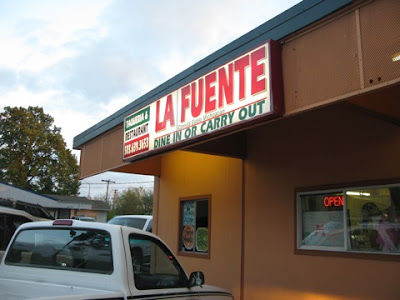 So one day, as Jon and I were tooling around in Tigard, we saw the sign for Taqueria La Fuente and were intrigued. Upon their window, another sign stated that they make their tortillas fresh, so in we went for a bite of lunch. We had a couple of tacos each and were completely blown away. There's a lady in the kitchen within view, making the fresh tortillas to order, and though they're a little thicker and larger than the Mexico City style, they were fantastic, as was the grilled steak that went inside. As it turns out, the state of Michoacán, Mexico has its own reputation for great street tacos. If you didn't know, Michoacân is in central Mexico, west of Mexico City and borders the coast. I may have driven through it, but am quite certain I never had a taco there. Fortunately, I now have La Fuente to provide them for me.

However, tacos isn't all that La Fuente does right. They make a mean chile relleno, excellent enchiladas, fine tortas, and tamales to die for. As a matter of fact, at Christmas time, we were looking for a source of Christmas tamales because (for anyone who wasn't raised in a Mexican-influenced town, like I was, such as Tucson, Arizona) tamales are a tradition on Christmas Eve in Mexico and parts of the American Southwest. I have carried that tradition with me to the east coast and back, but, again, was worried I wouldn't find them in Portland. Well, not only are good tamales not hard to find here, but lots of places do them up for Christmas, and you can order them for about $20 a dozen. We had gone into La Fuente to eat a few weeks before Christmas, asked about them, and the server gave us one to sample. Oh, yeah. We ordered a dozen of the beef tamales and they won the seal of approval from my family.

The staff at La Fuente are personable and sweet, even on Cinco de Mayo when the plethora of gringos lining up at the door didn't disrupt their easy, friendly flow. They make decent margaritas, have a good selection of Mexican beers and sodas, and, though the place is far from fancy, it's clean, comfortable, and the prices can't be beat.

I have lots of other Mexican joints to try in the Portland area, but for now, I'm all about La Fuente.