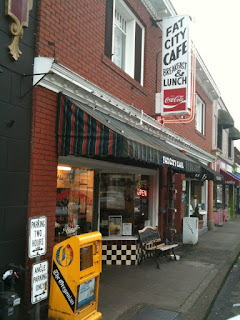 Well folks, Jon and I have made quite the shift in lifestyle. We up and moved out of NYC, all the way across the country to Portland, OR! This is a spectacular place to live, we're finding, and so full of sincere establishments we've been too overwhelmed to single a particular one out for this blog. However, since we've been here now a couple of months, it's time to start sharing with you the many amazing businesses in this beautiful, Pacific NW town. Jon did a post yesterday, which you'll see below, and here's my first of what I'm sure will be many:

The morning after we arrived at our new home in Portland, we headed out to breakfast at Fat City Cafe, in the adorable Multnomah (pronounced: mult-NOH-mah) Village, which is a pleasant 15 minute walk from our house. Multnomah Village (MV) resides in the southwest area of Portland, the outer-lying environs of which are perhaps not highest on the Portland hipness scale, yet MV, along with the nearby community of Hillsdale, are actually kind of magnets for the hip set, not only because they're just so darn quaint (which hipsters ironically rather like) but because of the exceptional restaurants and pubs that abound.

When checking out the area during our house search a couple of months before, Fat City Cafe had called to us among those many eateries, so we had been looking forward to trying it. It's a cozy spot, serving breakfast, brunch and lunch only, with maybe ten or so tables, and seats at the counter. The walls are covered with license plates from around the country as well as other photos and bric-a-brac, but it manages to not be annoyingly kitchy. The servers are super friendly and made us feel warm and welcome right away. The day of our first visit, we both ordered a basic breakfast of scrambled eggs, bacon, hash browns and toast (gluten free for Jon), and were delighted by how delicious it all was. The prices are amazing too, especially because Jon, being an oldster, had the same bacon and eggs under the heading of "Geezer Grub," so it was cheaper still. 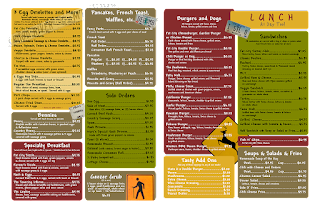 We've eaten there a handful of times since and have loved everything we've tried, though we haven't done lunch yet, only breakfast. As a matter of fact, lunch gets pretty crowded there, as does brunch on the weekends so we mainly just go during the week so as to not have to wait. On that first day we went, we noticed that by 11:30 the place was already filling up with bearded, man-bunned types and their goth girlfriends. If the crowd prevents you from getting a table, however, don't hesitate to try one of the other great brunch spots in the village, none of which have disappointed yet. I'll get to those eventually, but for now, there's no doubt that I rate Fat City Cafe: Extraordinarily sincere!

DIGG
Posted by Georgina at 1:51 PM