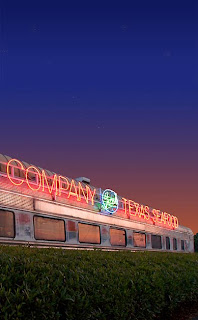 This post is long overdue. It was in June of 2011 that I was in Houston with my family, and my sister took us to this place called Goode Company Seafood, a local chain that also has BBQ restaurants, and I think she said a taqueria. I was expecting sort of a Spaghetti Factory type of feel. Not so, my friends. Oh, not so. You could smell the mesquite smoke from the parking lot as you approached the genuine railroad car exterior. The interior was kind of a cross between a diner and a seafood shack in an upscale sort of way. It wasn't cheap, as good seafood never is, but it was reasonable. The waitress was the kind of motherly, down-home type of lady you just wanted to snuggle (but I wouldn't take that liberty for fear of being slapped upside the head). When asked about foods that contain gluten (because right at the top of the menu it said to ask about it and we had some gluten sensitive folks with us) she was concernedly honest like any good mama would be, and very specific about what to order and not to order. I had the grilled Coho baby salmon and, it, the seafood rice, the veggies and the tastes I had of everyone else's catfish, hushpuppies, shrimp, fried green tomatoes etc., were mind-blowing.
Goode wine, goode fresh food, goode service, goode atmosphere and our own built-in goode company. What an aptly named joint!
Evaluation: Extraordinarily sincere!
http://www.goodecompany.com/