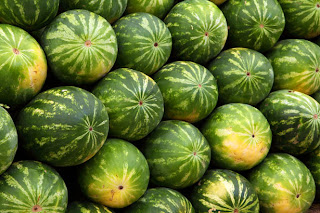 Over the past few years it seems that the local green markets have become more and more sophisticated and unfortunately more commercialized. Vendors vie heatedly for spaces, and pay rather large sums to be included in what once was one of the most sincere of trade methods: the farmer bringing his produce to the marketplace and selling it for a reasonable price directly to the customer. No middle men involved. It was nice, right? It felt as if we were somehow hearkening back to an earlier time when the community had not become so monetized.

A couple of evenings ago, Georgina and I ate at a popular dive in Manhattan where we ordered watermelon juice. It was so delicious and refreshing that we talked animatedly about making it ourselves. Wouldn't you know, the very next day, back in Astoria, we chanced upon an actual farmer selling his New Jersey grown produce in front of the home he had grown up in. He spoke of how he felt he was somehow completing a circle, selling from this location. I don't know if the city condoned his activity, and I didn't care when I purchased a perfect watermelon for $4.00. I did not take his photo. I did not write down the address. Let's just say if you're over by the Post Office on Twenty-First Street between 30th Ave. and Astoria Blvd, and you see a man selling produce under a collapsible awning in front of a home that's been there for a good long time, do yourself a favor and pick up on what the experience of sincerity is all about.

Watermelon Juice: place half of a small watermelon in a blender. Fill to the top with water. Spin to a froth.

Posted by Jonathan Ellis at 3:49 PM