It's only pizza, right? 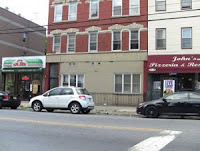 What you see in this image is a restaurant called John's Pizzeria which (let me state for the record) I have never been to, and two doors down is a Papa John's Pizza (where I have no interest in going). So what's my point? The John's Pizzeria has been in that location for as long as I've lived in Astoria, while the Papa Johns opened shop about a year and a half ago. As I see it, this was a deliberate and callus attempt to suck business away from a local establishment that presumably has a following of loyal customers -  a calculated move done solely in the name of, "business" (and when I place the word business in quotes I fully expect you to read it as an explicative). When free enterprise is demonstrated as nothing more than a money grubbing drive to run the other guy out of business - something has gone terribly awry.

This is not an evaluation.

Papa John's Pizza
2333 Astoria Boulevard, Astoria
Phone: If you really want to call them after my tirade - look 'em up in the yellow pages.
Posted by Jonathan Ellis at 7:53 AM