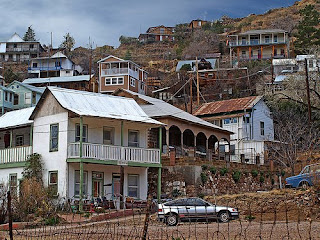 Yep the entire town. For anyone who's touristed around Arizona you know that there are a couple of things you can count on all over the state, especially in towns like Sedona (a well known "arts" community). The first thing is that everything is somehow related to cowboys, or to be more accurate the media myths of cowboys. You know, god-like men of honor in white hats protecting the local village from black hatted villains? And secondly trinkets... from  gee-gaws that resemble saguaro cacti to over-the-top turquoise or lapis jewelery and, of course, bronze sculptures of - you know it - cowboys. 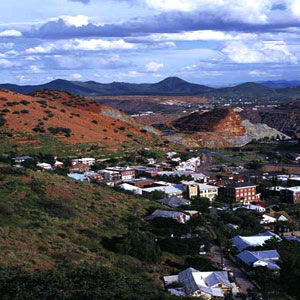 And then there are other towns, like Bisbee, where the focus is not on what they can sell you, but rather how to make your visit there memorable. The place is not fancy. In fact it's just a little run down. There are certainly a few places that would perhaps be better located in Sedona, but overall, this is a community that has been locked in time. The time that it is locked into is one of a less consumer oriented point of view. There is a ride you can take but it is not a roller coaster nor is it on a scenic railroad. Rather, it is down the mine shaft. This was a mining town that ran out of copper, but the area was so beautiful that folks decided to stay around. Those early settlers built their homes on either side of this tiny valley, and that's exactly what you encounter today. There is clearly a historic oversight committee that makes sure that even if McDonald's wanted to open shop (I can't imagine why they'd want to since there aren't enough people around to attract them, but you never know) they would be met with solid resistance to all that such a mega-corp represents. The 16 or so restaurants that are there have for the most part been around for a while, and the food they serve actually has some character that has nothing to do with extracting the tourist from every dollar they have, and everything to do with the simple pride of a community that has the integrity to care about itself.

Posted by Jonathan Ellis at 7:54 AM