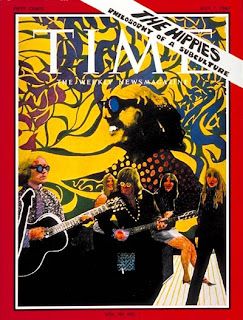 Dude! We went in search of sincerity last night and, by suggestion, we stopped first at the Yippie Cafe. We were greeted cordially enough by a bleary-eyed bearded guy, who paused long enough from playing roulette on his ancient computer to accept our donation. Pushing back a paisley curtain, we found that we had time traveled into a coffee house in the approximate year 1967. I felt like I'd been here before in some other when... Strewn about were overstuffed couches and chairs. A few tables were placed before a small performance space at the far end of the long room. A counter with several stools held a few pastries, a selection of coffee and tea, and a cooler that held a few bottles of cold fizzy stuff. Georgina and I shared a mineral water, but had to ask around for an opener since the bartender had misplaced the one he might or might not have had at one time or another. A kindly denizen produced a usable tool attached to his key chain. There was a man performing on the guitar and singing songs he had obviously written. He was the best thing about the place. He was very good. I won't bother to give you a history on this place (a link to their site is provided below) but I do want to point out that, as a "museum" as well as a cafe, it's underwritten by the State of New York, and I really see no other way it could exist.
But the question remains - was it sincere? Well, in the sense that all seven people in the place, (including the bartender and the performer) aside from ourselves, were so laid back as to each be living in a world of their own that just happened to connect within the confines of the Yippie - like it was synergy-in-action, man - then yes - it was ultimately sincere. On the other hand, did I come away from the place with the feeling that I'd really like to go back some day, and that the people running the joint were having a blast (admittedly this is perhaps not the best choice of words here) doing what they were doing? Then no.
Let me put it this way, unless Green Day decides to schedule a small venue (read: tiny) concert at the Yippie, I will very likely never go back. Will the people running the place care whether I show up there again or not? Nope. It's possible that they won't even remember if they were there.
Evaluation: (strangely enough) Kind of sincere