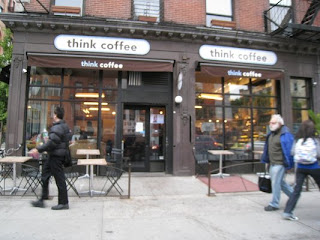 So, after visiting the Yippie Cafe, we desperately needed something to eat, it being around 11:00 p.m., us having spent an hour and a half earlier in the evening at our swing dance class (yes, we're taking
swing dance - very insincere of me to mention) and there not being anything palatable at the Yippie. So we wandered outside and into a place called Think Coffee that I had dismissed, when we'd passed it before, as looking like a yuppie (as opposed to yippie) haven next door. It so wasn't.

Relaxed, with wood floors and benches, little cafe tables and chairs, a high ceiling and walls of windows, they served vegan desserts and a variety of sandwiches, fair trade teas and coffees, beers on tap, and wine. Folks sat around chatting or working on their computers in a rather Starbucks-esque scenario, except for one little difference: THIS IS WHAT STARBUCKS CAN ONLY ASPIRE TO BE! I'm sure that way back in the day, in Seattle, the first Starbucks was like this, and then they chose mega-globalization, driving places like Think Coffee out of business, instead of just being satisfied with a few hundred stores across the country.

Anyway, we ordered a grilled cheese sandwich and split it, cheddar on hearty sourdough bread, delivered to our table by the cute, cheerful counter girl. It was so, unbelievably delicious. As we ate, we admired the compost and recycling stations, the subtle signage indicating the sustainable sources of their coffee, and that they donate 10% of their profits to charity. Enjoying the sixties pop music they were playing in the atmosphere of zero pretension, we suddenly realized, in searching for sincerity at the Yippie Cafe, we ultimately found it right next door.