Parr Lumber in Raleigh Hills is a builder and handyman's delight. Started by Dwight Parr Sr., and family-owned since 1930, there are thirty-seven other locations, but this one is darned close to my house. Am I personally a handyman? Well, not exactly, but I do know how to build something when I put my mind to it. During the summer, I decided to build a wooden walkway around one side of our house, so that we could avoid slogging through mud every time we wanted to tend the garden we'd prepared over the winter. 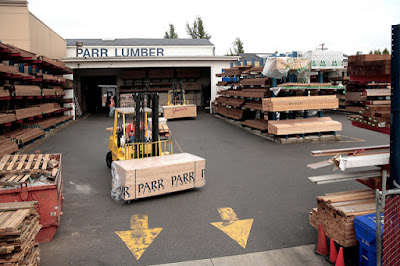 The walkway was something I had to think about, measure, think about some more, and measure again before deciding on the proper number of boards, how they would connect to one another, and their placement. As I said: I'm not a handyman—but a pretty able puzzle solver if I do say so myself. Once I had a clear idea of what I wanted it to look like, I spent a good amount of time online looking at prices so that I'd have some idea of what I was getting into and, of course, how much it would cost.
I took the usual web-path of logging onto the sites of some of the most recognized big-box building stores to figure out exactly the kind of wood I would need (pressure treated planks turned out to be the best answer for my needs). According to my sketches and designs, I knew the number of boards necessary to do the job, and I discovered exactly what they would cost. The prices were generally comparable at those stores including their delivery charges. However, the building store I had decided upon was located on a route that took me by Parr Lumber, which is, frankly, closer to me than any of the other stores. And the idea of shopping locally ultimately caused me to turn into their parking lot.
It was early in the day, and there were only a couple of other people in the store. I was greeted immediately by a very friendly guy, but let's face it—who's unfriendly in Portland? Anyway, holding up my list of materials, carefully folded to hide the name of the other store and their prices, I asked if they had what I wanted. They not only had it, but it was nearly a dollar-fifty less per board. Also, delivery charges for orders over $300 were free! My immediate savings, compared to the other stores, amounted to better than $250. Honestly, I'd figured the costs in this local chain would be more. Wasn't that how the giant stores took away the business from smaller stores in the first place, by charging less? Preconceived notions, once again, fly out the window.
A couple of days ago, I wandered back into the store to see if I could find out more about its beginnings, its history, etc. I casually walked into the office of Big Mike (fondly proclaimed as the Mad Armenian, in wood-carved lettering on the wall behind him); he offered me a seat, and we just hung out for a few minutes. While we were talking, one of the sales people poked his head in to see if the boss knew which metals were subject to electrolysis by proximity. Yes, I had to look it up to figure out what the heck that was, but what impressed me was that Mike was able to answer the question immediately, and make recommendations as though he'd been thinking about that particular subject all day. Wow! Along the way, I also found out that the Raleigh Hills location is the second oldest in the chain (the oldest is on NW 19th). It burned to the ground in 1964 and was put back into full operation within only three months, and that they have an online survey, parrcares.com, that automatically enters respondents into a quarterly drawing for a $250 gift card. Mike has worked there for more than forty years and has loved every minute of it. I can see why. What a place!
Parr Lumber
4605 SW Scholls Ferry Rd
Portland, Oregon 97225
Evaluation: Extraordinarily sincere!