A Local and a Chain

We ate at two very good places here in NYC over the course of the last few days. The one we went to on the Fourth of July was the more special of the two for various reasons, but they both deserve mention. 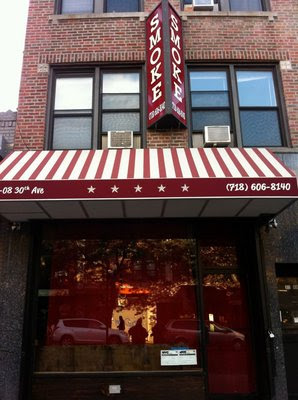 Since it was too hot and we didn't feel like grilling on the Fourth, we went to a barbecue place in Astoria we hadn't tried before. It's called Butcher Bar, though the sign on the building just says "Smoke." Small but comfortable on the inside, there's also a backyard garden for dining though too steamy that night for us. We were drawn to Butcher Bar because its website said all the meat is grass-fed, free-range, hormone and antibiotic free, etc., and everything they serve is organic. There were even vegetarian options like veggie burgers for the friend my son brought along, but I wouldn't go in there if I were a strict vegetarian, because they do have a meat-market case and there's a lot of red, raw meat on display. Well, it suited me fine, but only because of the afore-mentioned natural-ness of the meat. I ordered a 1/4 pound each of the pulled pork and brisket (I wanted burnt ends but, like most good bbq places they were sold out by that time of the day) and mashed potatoes. My husband got ribs and potato salad. Everything was divine - I mean scrumptious! And very reasonably priced. However, as friendly, kind, helpful, and fast the waitresses were, the kitchen couldn't keep up with the rush. We waited about a 1/2 for our food and my son and his friend longer, as they came in after us. The waitress said they were always busy on holidays, but if that's the case, the management should plan ahead for it. Oh, and it took about 15 minutes to get our check back after we gave them the credit card, so maybe the waitresses got overwhelmed too. Anyway, I love the idea of a local place that serves great, natural and organic, sustainable food in a nice and friendly atmosphere. For this I rate Butcher Bar:
Extraordinarily sincere! 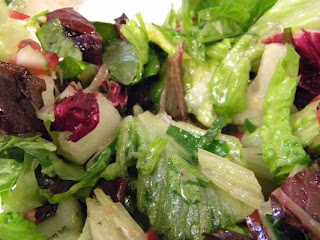 The chain restaurant we visited Friday the Fifth for lunch in Manhattan was Chop't - a place many readers may already be familiar with. I hadn't yet experienced the chopped salad phenomenon, but it sounded good, and Jon and I just needed a quick, light lunch. Jon ordered a Cobb Salad while I was still deciding, but when we looked at the amount of food going into it, decided to split it. He asked them to divide it into two bowls and I thought they would quibble, but they did it ever so cheerfully, at no extra charge. They were patient as he decided on the dressing, and in general were very friendly - something you don't always find in NYC. At the cashier, we were thinking about getting a drink, and she offered us a free cup of ice water. Very nice. The place was cool and comfortable - we even got a booth, and best of all, the meats are all free-range and hormone free. The veggies are not necessarily organic, but they try to serve local foods as much as possible. The salad was delicious and half of it was plenty for lunch. The whole thing, at 670 calories would have been way over the top for me, but most salads there had way fewer calories - between 300 and 400 for the whole thing, which is more like it. And one more super-plus: you can recycle the plastic to-go bowls and all other plastics, except the forks. They also have to-stay bowls that they wash and re-use, but we didn't think of it in time. I try to avoid chains, though this one is only in NY and Washington D.C. so far. I have to say, Chop't is one I'd try it again. So, though I would rarely give a chain our highest rating, I'll certainly rate it:
Pretty sincere!
Posted by Georgina at 2:07 PM