The Legend of Tian at the Riverbank 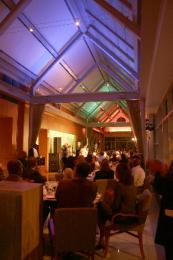 Thursday night Georgina and I went out seeking a legendary dance location. No, it's not that it's a legend in the community only spoken of in hushed voices... not that kind of legend, but rather the sort of swing-dance-community legend where word was passed around that a big band was playing in a somewhat obscure place (to us) that was expensive and flashy, but would not make you buy anything but a soda to try out the small dance floor.

We headed to the west side of Harlem with the voice of the GPS telling us in sullen tones that we needed to go over the Triboro bridge (Calling it the RFK Bridge sounds wrong to me) when we wanted to go over the Queensborough Bridge (Calling it the Ed Koch bridge is ridiculous, and I will never do it). Still we kept going, though our hopes were muted by endless shops, apartments, and chain stores that can be found anywhere in the city. Finally arriving at the corner of 145 and Riverside (all the address we had) was a bit of a disappointment. Nothing there that looks like a restaurant, and 145 dead-ends into Riverside State Park! We only chanced to see a driveway leading into the park. There was guard shack containing a guard. We stopped at the shack and asked in tremulous voices if there was a restaurant hidden somewhere down there. Lo and behold - he said, yes! 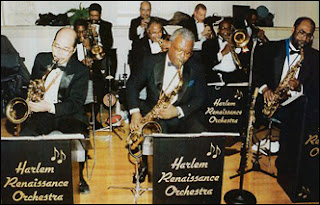 Tian at the Riverbank has free valet parking. In the darkness of the evening the restaurant's rounded face is elegantly lit, and, for those of us who are not made of money, just the least bit intimidating. The light emanating from the interior was tinged blue with electricity, and entering felt as if we just might be treading on ground reserved for the elite. That feeling ended as the doors swung wide and swing music washed over us. One of the hosts came and greeted us, asking if we wanted dinner. When we declined, without even a pause she directed us to a table near the dance floor. We found a few friends already there, some eating, others making use of the beautifully polished wooden floor. I ordered a glass of wine and Georgina ordered seltzer with lime. Making a quick calculation based on my surroundings, I figured we'd spend twenty bucks plus tip for the waiter and another few dollars for the valet. Seemed generally fair enough, considering. But the music! The music being delivered to our ears by the Harlem Renaissance Orchestra was fantastic, smooth and perfect for dancing. The people in the place, and I mean all of them. were welcoming, talkative and friendly. We had an amazing time, and we will be going back soon. The final bill was $8.00 - I left a generous tip for both the waiter and the valet and still came out way ahead. We checked the menu and the prices are actually very reasonable - the earlier talk of it being expensive notwithstanding - an urban myth it seems.

Now the legend is of the other kind, spoken of in revered (though not hushed) tones. We're telling our friends as I'm telling you - This place is, in my...

Evaluation: Extraordinarily sincere! - and I recommend it highly