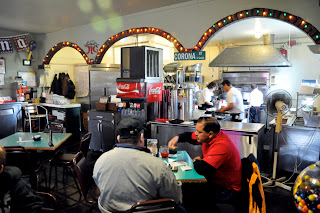 The following evaluation of sincerity was sent to us by Bill Josh Young and is posted here exactly as written.
I remember the Mexican food that was available in Tucson from the late 1930s to the 1950s–it was the best!

Over the years the food quality has been tempered by substitution of non-fat ingredients and the demands of tourists from New York and other eastern cities. It is no longer the same.

However, since 1957, there has existed in Escondido CA an unpretentious Mexican restaurant that is quietly serving the most delicious and purest of traditional Mexican food -- without a trace of colloquial influence. Every time I visit Escondido, I make a pilgrimage to Estrada's to satisfy my Mexican food addiction.

The restaurant has passed from the older Estrada family members to the younger members without missing a beat, nor has the quality of the food deteriorated. If anything, it has improved.

The price for # 1 on the menu -- 1 shredded beef taco with small, diced bits of potato mixed with the beef, a bean & beef tostada, refried beans and fried rice, plus ice tea is only $8. Their gorditas are to die for as are the chili rellenos -- all the food is unpretentious, but first class in quality and taste.

Most of the diners are of Latino descent, but a number of enthusiastic Anglos can be found among them. The Anglos always appear smug, as if they had discovered a great culinary secret that they just might share with the world, or maybe not.

Do not be put-off by the modest appearance of Estrada's -- both inside and out. It is truly a world class restaurant. 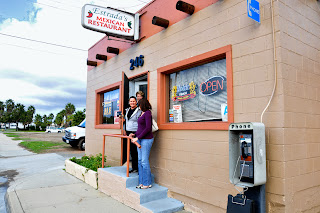