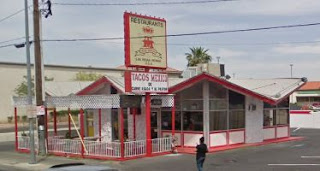 If I were asked to rate the cities I've visited as to which was the least sincere, the one that would immediately jump to mind would have to be Las Vegas, Nevada. To be fair, I've heard of other cities that might to step up to possibly vie for the honor, but I've somehow managed to avoid them.

Nevertheless, there is one place in Las Vegas that stands out, even within the sprawling insincere splash across the Nevada desert that is Las Vegas; one that literally exemplifies sincerity. It's just a little taco joint on the corner of Sahara and Valley View Blvds, where the tacos are inexpensive and absolutely authentic at the same time. The people working there take pride in what they are serving, and as far as I can remember, there are no slot machines in the dining area.

Alas, the last time we visited my parents (yes, they live in LV) the place was closed. Judging by the photo that I snagged from Google Maps, it looks to me as if that continues to be the case. Perhaps in the swamp of insincerity, it was just too much to expect that such an odd little oasis could be expected to survive. But maybe the photo was taken at an off time, or during a vacation or whatever. It looks like in might have been recently painted, so perhaps there's hope after all.

The fact is, at least in memory, Tacos Mexico was a shining example of a local business that glimmered brightly amongst the over-the-top lights of a city that long ago forgot what stars actually look like in the ink black of a desert night sky.