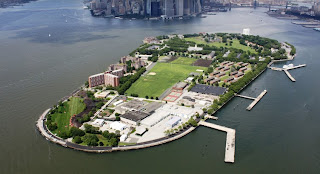 The blogosphere is abuzz with comments on the disaster that was the Parked Food Truck Festival at Governor's Island, NYC, September 5th, 2010. My job, however, is to comment on the sincerity or lack thereof of the experience. Until that fateful Labor Day weekend, I had never been to Governor's Island but had heard a lot about the events there and how nice they all were, though from whom I can't quite remember. So Jon and I, in the interest of having a new adventure and not sitting on our butts all weekend, decided to check it out. My assessment is as follows:
The ferry ride to Governor's Island at approximately 3:30 p.m. was spectacular and we didn't wait long to board though there were tons of people (which should have given us a clue as to what awaited us). I love a good boat ride, so I was a happy camper. It takes about 10 minutes to get there from South Ferry - there's also a Brooklyn Ferry. Evaluation of the ferry: Very sincere 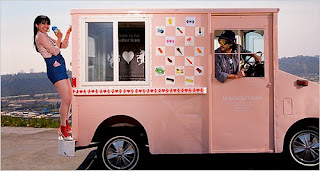 Once we arrived on the island, we discovered that The Parked Food Truck Festival we'd come to enjoy was a horror-show: hundreds of people in each line, the vendors and promoters, MeanRed, obviously overwhelmed, and many visitors ending up not eating at all - including us. Evaluation of the festival: Not even in the ballpark
Governor's Island as a whole was not as lovely as I'd expected - just kind of a big park with lots of official-type buildings and...tons of people. We did end up going to an art fair there, a kind-of multi-tiered gallery with some rather good art displayed, but in general, I felt my Sunday afternoon was wasted. That and the lack of food made me way crankier than I like to be on a beautiful long weekend. It made me wonder: when is a good time to go to Governor's Island? When would it not be crowded? On a weekday? It's only open Fri-Sun. When the weather's bad? Why bother? My overall evaluation of the Governor's Island experience so heavily promoted by our fair city: Not sincere at all