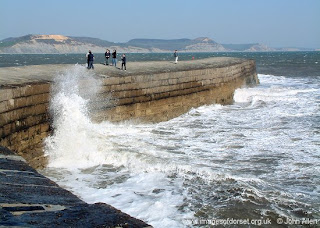 The main purpose for our journey to England a few years ago was so that I could connect with my Anglo roots, and visit the places where my darling Jane Austen lived and that she wrote about. (I didn't really care if Jon and Josh wanted to go; they were along for the ride) And now for a shameless and insincere plug: little did I know at that time, that I would go on to write my first novel, The Time Baroness, about a time-traveler who goes to those same places, in the year 1820, for largely the same purpose. It was a good thing, then, that I had visited, on that trip, the charming, ancient town of Lyme Regis on the Dorset coast. This is a place made famous by a segment of Jane Austen's Persuasion. However, you wouldn't know that fame had ever touched the quiet environs of this lovely place that spring when we visited. Perhaps during the summer season it really bustles, but as we drove down the steep road into the heart of the village and stopped at a pay phone to call about availability at a B&B that sounded intriguing, we just felt lucky that they had a room on such short notice.

And what a room. We found the Cliff Cottage B&B perched on a hill directly overlooking the ocean and the Cobb. Ah, the Cobb. This is the stone structure that juts out into the harbor and makes a kind of break-wall to protect the beach and the fishing boats. It is the place where a pivotal scene in Persuasion takes place; also the point on which the tragic French Lieutenant's Woman, gazes out to sea - both of which I highlight in my book, The Time Baroness - oh, did I mention it already? 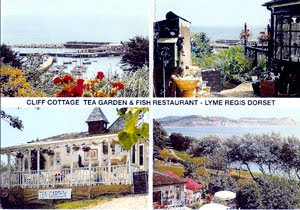 Anyway, we were led down a little stone path through a garden to a small bungalow in which we found a beautifully appointed space, white, eyelet down cover on the bed, everything fresh and clean and a little, pull out futon for Josh, as well as a full bathroom. The owners were an older couple, very funny and friendly, and in the morning, before our walk on the Cobb, they fed us one of those full "English" Breakfasts that Americans appreciate so much. The whole experience couldn't have been better, and I hope they're still there, with their "pet" seagulls they named Albert and Victoria, and that if you go, the bungalow is available. Oh, and don't forget to bring along The Time Baroness for some appropriately themed reading.